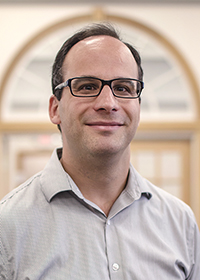 Dr. David Gotz is Frances Carroll McColl Term Professor of Information Science in the School of Information and Library Science (SILS) at the University of North Carolina at Chapel Hill. Dr. Gotz leads the Visual Analysis and Communications Lab (VACLab) where he conducts research related to the study and development of visual methods for information analysis and communication. He also has a courtesy appointment in Computer Science and serves as the Director for UNC’s Certificate in Applied Data Science (CADs) Program.

Dr. Gotz’s research has been published in leading scientific journals and conferences, and has been funded by organizations such as NSF, NIH, DOD, and various industry partners. His work has resulted in numerious patents, and has been recognized with both scientific and industry awards. Dr. Gotz is also co-founder and past chair of the Visual Analytics in Healthcare Workshop (VAHC), a co-founder and past chair of the AMIA Visual Analytics Working Group, and an associate editor for IEEE Transactions on Visualization and Computer Graphics.

Prior to joining SILS, Dr. Gotz was a research scientist at the T.J. Watson Research Center at IBM Research. During his final years at IBM, he was part of the Healthcare Systems and Analytics Research Department. He also spent several years working for the Intelligent Information Interaction Department which he joined immediately after earning his Ph.D. in Computer Science from UNC-Chapel Hill in 2005. Prior to his Ph.D. studies, Dr. Gotz received an MS in Computer Science from UNC-Chapel Hill in 2001. He graduated with highest honors from Georgia Tech in 1999 where he majored in Computer Science and received a certificate in Economics.